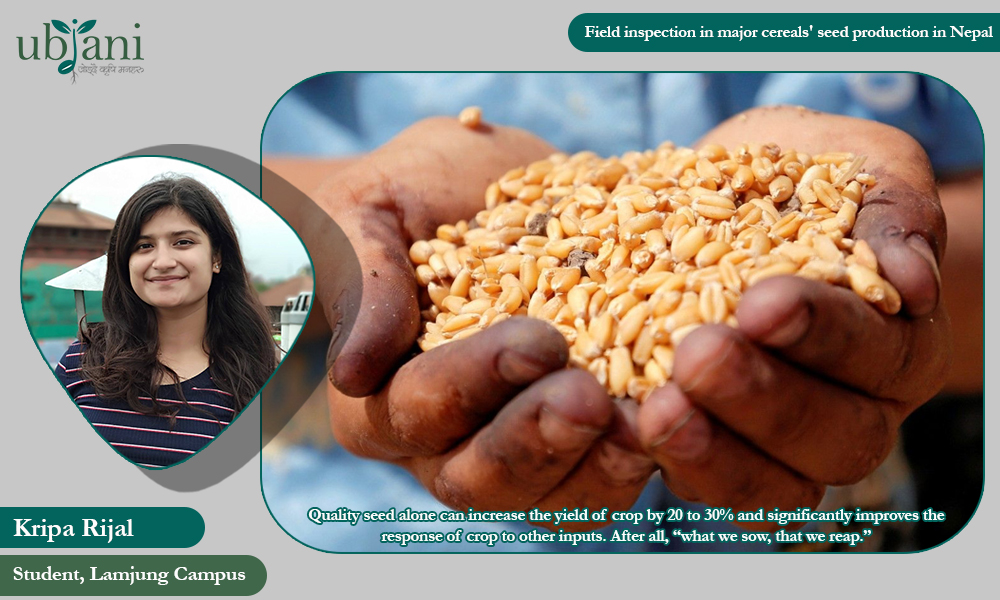 As it is being said since ages, Nepal is an agriculture based country having more than two-thirds of total population being engaged in farming. Rice, wheat and maize are the major cereal crops of our country. According to recent statistical information released by Ministry of Agriculture and Land Development (MoALD), paddy, maize and wheat are grown in area of 1491744ha, 954000 ha and 703992ha respectively which makes 42.23%, 25% and 20.4% of total area of cereals. Quite good statistics since cereals, mainly rice is the major staple food crop of Nepal, right?

The production of quality seed can be solution to this problem of Agriculture trade deficit. Quality seed alone can increase the yield of crop by 20 to 30% and significantly improves the response of crop to other inputs. After all, “what we sow, that we reap”.

A minimum of two inspections should be conducted, the first inspection is conducted at flowering to verify source of seed used for seed production and to check isolation requirements. The final inspection is allowed with the request of seed grower, if the number of off types and objectionable weed plants exceed prescribed permissible limit. During final inspection at the maturity of seed crop, actual counts are taken from separate places distributed at random in such a way that whole area of the seed plot is covered. Thousand ear heads should be included in each count and examined carefully for off types and objectionable weed plants. An inspection and a copy of the report should be handed over to the seed grower.

In case of wheat, a minimum of three inspections should be conducted, the first inspection is conducted at emergence to verify source of seed and to check isolation requirements. Second at heading stage. Plants affected by loose smut should be recorded and collect the affected plants and bury or burn them. To avoid spreading of spore, the loose smut ear head should be put in a bag. The third and final inspection is conducted at full maturity to record off types and inseparable and other crop plants. During any inspection between ear emergence and harvesting, actual counts should be taken from separate places distributed at random in such a way that whole area of seed field is covered. Thousand ear heads should be included in each account and examined carefully for off types, number of objectionable weeks and loose smut affected plants. An inspection report should be prepared on completion of each inspection and copy of the report should be given to the seed growers.

In case of maize; a minimum of two inspections should be conducted. First at just before flowering and second at flowering and fruiting stages to record off type plants before harvesting during final inspection actual counts are taken from separate places distributed at random in such a way that whole area of field is covered.500 plants should be included in each count and examined carefully for off type plants.